How Bermuda Gets Its Water

From the surface, Bermuda is an island paradise. It’s filled with lush, tropical greenery and quaint pastel estates. The locals are relaxed and welcoming. It has everything you need for a fun, sun kissed and heavenly vacation or a laid back and relaxing place to work.

However, when you think about it, Bermuda is a tiny island in the middle of the Atlantic Ocean that is less than 21 square miles (53km) in size. Surrounded by salt water with very little fresh water on the island, you might begin to wonder, where does Bermuda get its water from? How do people, homes and businesses on the island get access to fresh water? And what goes on under the surface, to help manage the island’s ahem, other kind of flush?

Come with us and explore the water and sewage systems in Bermuda. From tank to tap and back to tank again, we’ll cover everything you need to know about water supply and waste management in this beautiful island nation.

Where Does Bermuda’s Fresh Water Come from?

Bermuda is a country that’s very aware of its water needs as there are no sources of fresh water on the island. For over 400 years, the inhabitants have put a great deal of careful research and resourcefulness into ensuring that homes and businesses have access to adequate supplies of fresh water.

From this work, Bermuda now has three primary sources of fresh water:

Bermuda receives an annual rainfall of over 1500mm per year – and there’s no “winter” or “rainy” season in Bermuda.  It rains all year round! There are rainy days every single month with an average of five inches falling every month - though in recent years there have been some freakishly high monthly averages recorded.

Bermuda locals know they should take a raincoat wherever they go. This propensity for rain is part of what makes Bermuda so lush and green – as well as being the primary source of fresh water for the island.

But how does Bermuda capture this rainfall?

When you’ve looked at pictures of Bermuda, have you ever noticed the unique and beautiful roofs on Bermuda houses and buildings?  They’re painted white, and they’re a signature of the island’s architectural heritage.

These roofs are more than just a pretty face though - they catch the rain! The secret lies in an innovative method that was pioneered over 400 years ago.

The roofs have a special design where the limestone they’re made from creates the “steps” of a shallow pyramid. This slows down the flow of rainwater as it falls and then it’s funneled into an underground tank. The white color serves a special purpose, too. It reflects ultra-violet light, which helps to purify the water as it’s being collected.

The technique harkens back to the time of the first settlers who had the idea to create paved terraces to catch the rainwater. Necessity is the mother of invention, after all, and without this clever idea, it would have been much harder to survive on the island.

This tradition quickly moved to rooftops and now it’s enshrined in law. Almost all roofs must be built in this manner (though many new constructions use concrete instead of limestone). The houses must also have an underground tank to store the captured water.

For the system to work, 80% of the roof needs to have adequate guttering and the storage tanks must have a capacity of at least 100 gallons for every 10 feet of roof space.

The limestone roofs also help to keep Bermuda buildings cool. Not only is this resourceful but also good for the environment. Researchers from the Lawrence Berkeley National Laboratory of California have shown that a 1,000 square foot area of a rooftop painted white has about the same one-time impact on curbing global warming as cutting 10 tons of CO2 emissions.

When you combine the water-thriftiness that many Bermuda households practice with the climate research, this rainwater collection system makes the Bermuda rooftops not just practical, but sustainable as a good, clean renewable resource, as well. 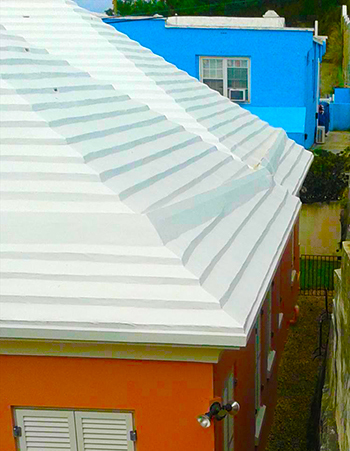 More recently, exploration under the island discovered a series of freshwater “lenses” or aquifers under the surface where ground water accumulates. These are layers of fresh groundwater that sit on top of heavier salt water.

Around three-quarters of a billion – or 750,000,000 – liters of water end up in the lenses as refurbishment water every year.

Over 3000 households on the island have private wells that tap into these lenses to provide additional water. It can be brackish, so the water isn’t potable (meaning you can’t drink it). It’s used mainly for flushing toilets and watering gardens.

Reverse osmosis is a fancy way of saying desalination. Bermuda has six plants that generate around 13,500 cubic meters of water per day, or 200 million gallons a year.

Although desalination can be a controversial topic, providing adequate fresh water is a priority for the island’s tourism business, which is a cornerstone of the nation’s prosperity. Both hotels and golf courses use large amounts of water and Bermuda has more golf courses per capita than any other country.

Many of the large hotels use water produced by the reverse osmosis plants so that their guests can enjoy an abundance of fresh water – you can imagine that a hotel would be a big water user. Just think of all those towels. Sometimes this desalinated water is used primarily for laundry and showers – then it’s collected, treated and use again for irrigation.

In the town of Prospect in Devonshire Parish, one government storage tank alone holds three million gallons of reserve water produced through desalination. There are pipes from the tank that lead to key parts of the island; including Hamilton, Shelly Bay, some Prospect housing and the King Edward Memorial Hospital.

Other storage facilities supply military properties in St. George’s, Ordinance Island, the Somerset and Hamilton Parish quarries, and other key buildings and facilities.

Bermuda doesn’t have any national sewerage system in place for the large amounts of sewage that are produced daily by inhabitants and visitors to the island. This isn’t an oversight – it’s because the solid limestone rock that Bermuda is built on doesn’t enable any piping system to be laid.

There is a local system within the City of Hamilton, but all other houses have either a cesspit or a septic tank underneath the property. There are strict construction requirements in place to ensure they aren’t close to water tanks or water lenses.

Some primarily-treated effluent is also disposed of through sea outlets (usually over 700m offshore) and through waste disposal (injection wells). Bermuda’s Department of Health regularly monitors the seawater around Bermuda for pollution levels.

So there you have it – that’s how Bermuda stays fresh and clean and ensures everyone has sufficient water to drink or use.

It’s worth noting that the locals cherish their water and don’t take it for granted. Being careful with water has been ingrained into Bermudians over their 400 years of history. Having to mainly be reliant on a natural source of water – the weather – means people are generally very thrifty with their water consumption. There are few things worse than running out of water. Bermudians know this on a deep level.

Fortunately, the government now runs a program where residents can buy a truckload of fresh water to replenish their tanks for around $55 per load. So there is always a backup supply in place but this is a last resort and one that Bermudians try to avoid if possible. Unfortunately, sometimes there are dry spells and that makes this program a very important resource.

Water is a valuable commodity no matter where you are in the world, however, some know this more than others. This tiny island surrounded by the sea with water, water everywhere, knows how fragile a water system can be. You look around and see the crystal blue stuff everywhere on the island and yet not a drop can be drunk.

Those with fewer resources are the most resourceful.